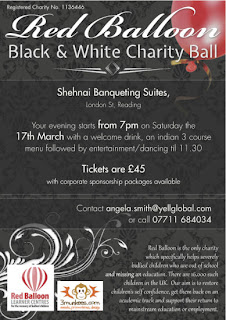 Tickets cost £45 and will include a three-course Indian banquet, with entertainment including comedy dance duo Danny and Dan. Contact Angela Smith on 07711 684034 or angela.smith@yellglobal.com

Red Balloon's mission is to aid the recovery of children who are unable to attend school because they've been severely bullied.

The organisation is in the final stages of preparation to open a new Learner Centre in Reading - these provide a safe environment for full-time 'intensive care' schooling for 9-18 year-olds with academic, pastoral and therapeutic programmes to help reintegrate young individuals back into the mainstream.

As many as 16,000 such children live in the UK, and as many as half have attempted or seriously considered suicide.

Former X-Factor contestant Danyl, who has confirmed he will be attending the event, said he was 'very excited' to be associated with this cause - one which he knows all-too-much about!

The series-6 heartthrob from Arborfield had been accused of sexist bullying competitors girl-group Kandy Rain and singer Stacey Solomon by talent judge Louis Walsh, before experiencing the other side of the tabloid knife when 'accidentally outed' by Danni Minogue. The subsequent public and media outrage at this intrusion into his personal life forced producers to respond with an on-air apology from the antipodean singer.


Oranjepan says:
while life in the limelight will magnify the intensity of feeling, any suffering may spread unchecked once it reaches into the shadows. If celebrities can use the lightning rod of their experience to illuminate the issue and stop the vicious circle of violence then we're happy to applaud.
2 comments:

The shock of the cold

Winter weather traditionally inspires giddy childlike enthusiasm, as can be seen on Bracknell's slopes (video) - and this has been replicated on the blogopshere too.

Ceramix notes the generally mild winter to date, but gets excited by his rapidly falling thermometer which bottomed out at -8 degrees Celcius and takes a few snaps of the snow.

Up on the downs Adrian Hollister turns killjoy with a warning to the public to take care, as 3inches of snow will mean ice on the roads. But down in the Kennet valley the canal froze over, and all the enjoyment is lost as it's turning to slush already.

In less rural areas of the county John Redwood MP attempts to reassure panickers about keeping the roads open for business, while Cllr Ricky Duveen is more placid in his concern at the disruption to ordinary people - although you can guess which of the two expects someone else to do the work, and who is prepared to put their own back into sorting it out.

Labour voices are celebrating winning government funding 'which will help save lives' by allowing vulnerable people 'to keep warm' during the winter months.

This is despite acknowledging the 'cold snap' is unlikely to last, and using the funds to initiate a campaign to set up a council telephone line to target advice at those whose health may be affected by cold, with small grants available 'only in extreme cases' (a follow-up on the level of take-up may be informative).

However The Porridge Lady provides a much simpler, more direct and quicker answer with a recipe for feisty ginger porridge to heat up your mornings and beat the cold.

Cllr Sarah Hacker also provides details of RBC's winter plan, as RBC teams up with homelessness charity Launchpad Reading to comply with the Severe Weather Emergency Protocol (SWEP). This is to ensure extra help is available for people without permanent accomodation, having not yet fulfilled a promise to increase the number of beds in the town's hostels from 200 to 224.

Elsewhere Mark Thompson looks at the state of debate on social media about climate change - concluding that the clash of opposing dogmatic beliefs are prevailing over scientific fact and this is proving unhelpful.

Meanwhile Jane Brocket is baffled by backwards attitudes to cold weather of the British. She suggests it is 'old-fashioned' to exist in a perpetual state of unpreparedness, and the annual shock of winter is simply unnecessary.

Not something Elizabeth Thomas suffers from - after escaping the 'ominously' heavy snowclouds she enjoyed a 'magical' evening in front of a roaring fire watching the snow through her bay window with her family.

What's that you say?

Cyclists and journalists may seem like occassionally odd bedfellows, but local bloggers appear to think they talk the same language.

Groovy Yank pokes some fun at the self-importance of guardians of public information.

And Andrew Sykes puts a spoke in the wheels of peddalers of stereotypes.

Elsewhere Caroline Everleigh suggests it is the haste of people working under pressure which leads to substandard work. She argues agitated fidgeting doesn't lead to accomplishment: 'We are human beings, not human doings'.

Evidently Scaryduck is so underemployed that he has plenty of spare time to put words in the mouths of prominent figures - possibly the reason why he has been named 'Britain's funniest blogger'.

#rdgnews - Tesco's remarkable recent growth in the local area has lead to suspicion of backroom favours and secret deals are propping up political interests at the expense of local businesses.

The decision to award a £27m contract for a new 84,000-sq m. distribution centre to Vinci Construction UK on the site of the former Courage brewery in Whitley was greeted by a delighted Chris Pape, who talked up the prospects of creating as many as 1,000 new jobs at the site.

The Worton Grange location was chosen after campaigners forced the rejection of plans for a 'mega-shed' outside Andover. Planning permission was hurriedly granted by RBC in September 2010 after the collapse of the previous proposal, however Vinci won the contract from the retail giant with a promise to go beyond compliance with BREEAM enviromental regulations and cut CO2 emissions by an additional 1/3.

Meanwhile controversy is brewing over the ways which Tesco is able to flex corporate muscle to get planning decisions granted following the refusal on appeal for a 14th store within borough limits, hot on the heels of a 13th store on the site of the former Westside pub in Tilehurst Road.

Local traders complained about the impact on their business and on the visual coherence of the area, which includes Grade-II listed buildings and the adjoining Christchurch Conservation Area, "It would have ruined the look of the entire parade along here."

Commenters on Reading Forum are understandably underwhelmed by the supermarket chain's drive to build an effective local monopoly on the grocery trade, and note recent bad corporate decisions are based on personality rather than sound economic reasoning.

Politicians are also naturally keen to express their positions, and Katesgrove councillors have been anxious to show their democratic credentials in an area promising to be a fiercely contested electoral battle-ground.

LibDem Cllr Warren Swaine spoke against the plans at the appeal hearing, calling the Tesco shop 'excessive' and saying it was 'the wrong location and the wrong building'.

And Labour's Cllr Matt Rodda said, "I hoped I helped as I successfully pushed for more time for residents to feed in comments. I also wrote in myself raising concerns with the inspector," - claims which Cllr Swaine challenged in an extensive blog post after recieving the reply to a Freedom of Information request proving his counterpart is either deluded or attempting to decieve the public.

PR consultant and Internet Psychologist, Graham Jones, discusses the issue of playing to the prejudices of an audience and saying different things to different people, noting how contradictory attitudes can easily be simulated - or covered up - via mixed-messaging in the media.
He provides some powerful insight, stating,


"If someone is unwilling to accept any official story for whatever reason, then it appears changing their mind with logical argument is unlikely as they will counter such debate with illogical and contradictory claims, without seeing the nonsense of their viewpoint."

Graham follows up with another of his excellent-as-standard posts, explaining some of the reasons why people are 'economical with the truth'. According to research, the behavioural incentives for honesty are increased by a reduction in use of feedback mechanisms where cooperation is required, but this can prove counter-productive in competitive situations.

He adequately sums things up, warning decreases in truthfulness at the top of society are undermining trust in authority more generally.

In a perfect demonstration of this theory the Green Party's Adrian Windisch earlier complained that Reading's transformation into 'Tesco-town' is the consequence of a stitch-up between Tories, Labour and LibDems, who he says are all aligned in their common support for the 'leviathan'.

And the consequences have been writ large in grafitti on the walls of a similar new convenience store in Twyford as vandals are repeatedly targetting Tesco for developing a building campaigners had long earmarked for a desperately-needed new library.

Elsewhere Wendy also wonders about the impact of split-personality disorders.


Oranjepan asks:
the establishment stimulates an extremist conspiracy, is it accidental, necessary or deliberate?
No comments:

"Reading List... is fantastic, it could help revolutinise politics in Reading"
Matt Blackall

"An excellent digest of the thoughts of local bloggers"
Reading Guide